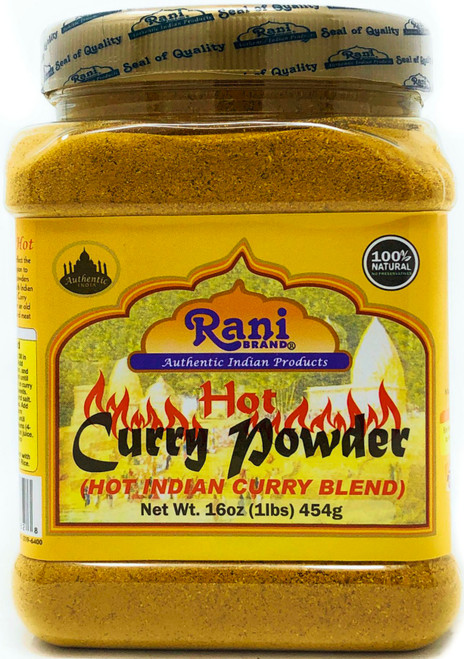 Rani Curry Powder Hot Traditionally, the spices used in curry blends reflect the availability of spices and the climate of the region to which they are credited. North Indian curry powders tend to be milder and very aromatic, while South Indian blends tend to be hotter in flavor. Rani Hot Curry Powder is of the southern variety (often referred as Madras), derived from an old family recipe. It compliments both vegetable and meat dishes, adding both color and flavor.

Sharing a little story on our founding... My father, Ramesh Chander, the founder of our company, owned small Indian Grocery in Culver City, CA by the name of Bharat Bazaar. He opened this in 1979, a couple years later the very first Indian Restaurant in Los Angeles opened up shop too, the owner was Mr. Kapoor. He has asked my father to source him spices & blends, and my father picked one of the major brand off the shelf items and sold it to him. A day later, Mr. Kapoor came back, angry! He told my father this is utter garbage, whomever blended this did not use all 11 spices and furthermore they just blended a ton of coriander (the cheapest spice in this blend) to make it cost effective.

Mr. Kapoor had my father write down the proper blend, and Mr. Kapoor was an ITC trained chef out of India, he knew his stuff! My father blended the items together and he knew right away, this blend will be amazing. Mr. Kapoor agreed. My father took it one step further and began grinding all the spices fresh and began selling them at the shop. It was a hit! So much so that my father began blending all the other spices with Mr. Kapoor. Creating a Tandoori, Tikka, Chicken, Beef, Garam and many other masalas (spice blends).

And now I get the privilege of sharing these to the world via Amazon. We currently sell in 11 countries and the blends, the quality and mix that goes behind them are appreciated everywhere. It brings a smile to his face and mine, I'm his son, Suneel Chander, 3rd generation spice expert.

You'll LOVE our Curry Powder by Rani Brand--Here's Why:

Authentic Taste comes from 11 high quality pure spices blended in harmony, not a partial recipe made from 5-6 spices like many other brands

Rani's famous and top rated curry powder, we present you with a wonderful, easy to follow recipe to make Lamb Stew Curry. Please subscribe to our channel, don't forget to share it with your friends & family! Direct link to this product: https://www.amazon.com/Rani-Curry-Powder-Natural-Gluten/dp/B00302N1DS or directly at our website: http://www.ranisworldfoods.com/rani-curry-powder-hot-3oz You can buy this and many of our products on Amazon, visit our brand page: https://www.amazon.com/ranibrandauthenticindianproducts Malabari Mutton Stew (Video Transcript) Ingredients ¼ Cup Vegetable Oil 500g Lamb in Bone, cut into pieces ½ Tsp Mustard Seeds 1 Onion, finely chopped 3 Fresh Red Chillies, slit 2 Tbsp Rani Ginger-Garlic Paste 5 Baby Potatoes, roughly cut 2 Carrots, cut in roundels 1 Medium Cauliflower, cut into florets Salt to taste 2 Tbsp Rani Curry Powder Hot 400ml Coconut Milk 2 Tsp Lemon Juice Coriander, for garnish Steps Step 1 In a pressure cooker, heat oil over medium heat and add the lamb pieces. Sear the lamb for 5-7 minutes and add mustard seeds along with the onion. Saute for 10 minutes and add red chillies along with the ginger-garlic paste. Step 2 Cook for a minute until the raw smell goes away. Add baby potatoes, carrots, cauliflower, salt and curry powder. Mix well and cook for 5 minutes while stirring in between. Step 3 Add coconut milk, mix well, cover with the lid and cook for 45 minutes over low heat. Step 4 Once cooked, remove from heat and keep aside for the pressure to subside. Step 5 Once the pressure has subsided, transfer the mutton stew to a serving bowl, squeeze lemon juice over the stew, garnish with coriander and serve hot with steamed rice or Malabari paratha. Preparation Time:15min Cook Time:1h Ready Time:1h 15min Servings:4